Martin learns that revenge is not the answer 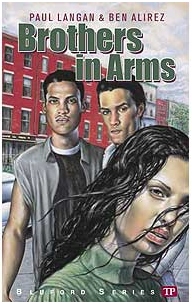 In the book, Brothers in Arms, Martin Luna is a gang banger whose little brother, Huero, get kills in  drive-by shooting.  Martin's mom tries to help her son survive by putting him into another school.  That doesn't work and when Frankie tries to get Martin to get revenge, Martin realizes that Frankie is a bully who wants Martin to fight (kill) a rival for him.  Frankie was the target in the drive by that ends in Huero's death and Frankie tries to bully Martin into killing the guy so that he stays off of Frankie's back.

Martin has a great teacher, Mr. Mitchell, who tries to help him but he is not willing to take the help at first but once Martin realizes that Frankie just wants to use him he asks Mr. Mitchell for help.

In this book the bully, Frankie, does not act like a regular bully and doesn't push Martin around.  Frankie tries to use Martin to do his dirty work and once Martin figures this out and stands up against him, his life turns around and he gets better.  The key to fighting a bully like Frankie, or any bully, is to make sure that you TELL THEIR SECRET.  Once the secret is out, the bully doesn't have the power anymore.